The photographic of New York was founded in 1949 and started by seven founders of Chinese-American photographers, including Wellington Lee, Yook On Hom, Gai Wong, Soo-Hoo Check, Larry Fong, Henry Lee and Mun Sheuch. Wellington Lee, winner of the $5,000 Grand Prize in the Color Section of the 1948 Popular Photography International Picture Contest was elected leader of this society. Due to a small group of members and lack of funds, meetings and activities were held in the Wellington Lee Studio of New York City. Soom afterwards, other founding members joined this society including Francis Fong, Chuck Ngai, Yuan Nam, Chiang Nam, Leung Wan, Loo Dock, Leung Kee, Danny Leung, Kwok-Wing Eng and others. Members of this society raised enough funds to renovate and old garment factory at 31 Division Street of New York City into a modern day camera club. An official opening party was held at the new headquarter for the society late in 1952.


In the early years of our society, most of our members were interested in monochrome and color slide photography. We sponsored our First Color Slide International Salon in 1955 and two more salons after that. The first salon considered a forerunner in photographic history by a Chinese camera club in the world. Meanwhile three of our members, Larry Fong, Wellington Lee and Francis Fong had outstanding international salon records and became the Top Ten exhibitors of the world. For the first time, Chinese photographers were among the Top Ten Exhibitors in color slide exhibitions.


From 1958 to 1969 our society sponsored some special photographic contests for the purpose of promoting photography among the American Chinese camera enthusiasts in the U.S.A.


In 1970 the landlord took away our society quarter for his own use and as a result, our society once again used the Wellington Lee Studio as a temporary meeting place. In 1971, PSNY President Wai Moy, Adviser Wellington Lee and Keith Lee rented another place for our society at 200 Center Street, New York City. Members including Keith Lee, Yee Fong, Louis Lou, Dong Kong and others fixed up that place for our society. Meanwhile members including Kai T. Jan, Tak-Kwan Lum, Chuck Ngai and others offered outstanding services to the society by carrying out various programs. In 1972, PSNY created an honor system to reward members as an incentive to show appreciation for their services to society and their advancement in photography. The PSA International Convention was held in New York City, in 1972, our society adviser Wellington Lee provided a banquet at On Luck Restaurant and PSNY President Wai Moy invited Mr. & Mrs. DeWitt Bishop, former PSN President Wai Moy made the presentation of the photographic honors of our PSNY to our honor guests as a gesture of better understanding among friends and the promotion of the interest in photography.


Our society conducted the First New York international Salon of Color Photography in 1973. Yook Dak Lee was the Salon Chairman. President Kai T. Jan was our PSNY official for the salon opening ceremony and our honor guests were Mr. Yen Jin and Miss Yee Fay. 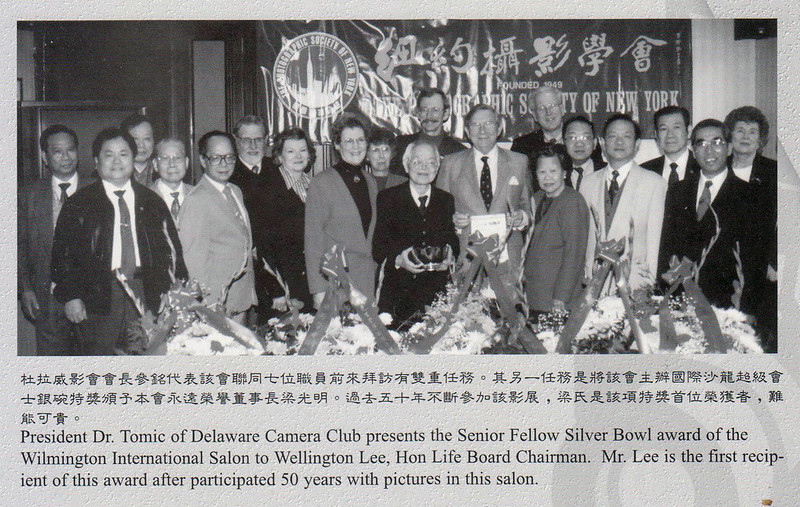 Special agreement was made between the Photo Club KBC of South Viet-Nam and our society for the purpose of exchange photographic honors and the promotion of better understanding among friends through the interest of photography. PSNY Presidents Kai T. Jan presented the Photo Club KBC honor certificates to our members in 1973.


In order to improve the working efficiency and cooperation between the Legislative and the Executive Committees of our PSNY, a Board of Directors was created to replace our Honorary Advisory Committee by an amendment made to the PSNY Rules and Regulations and By-Laws in the General membership meeting 1974.


An amendment was made to Rules and Regulations and Regulations and By-Laws of the PSNY in 1976 in a General Membership meeting to include overseas membership enrollment. At the same meeting, special authority was given to our Chairman of Board of Directors, Wellington Lee to extend invitations and made arrangements with the officials of various photographic organizations in the Far East. Mr. Lee was designated to be the Honorary Representative of our society during his attendance in the 4th Asian Federal Congress of Photography in Taipei, 1976 and a tour to the Far East afterwards. Also as a result of the trip, PSNY had the following Overseas Honorary Representatives including Mr. Chin-san Long, Mr. C. T. Chang., Mr. Chan Yu-Kui, Mr. Lee Kin-Fai, Mr. Hui Fook-Ming, Mr. James Tse Kin-Bong, and Mr. David P. C. Tay, Mr. Tong Koon Hung, Mr. Yan Fook-Luen, Mr. Ang Kian Hock, Mr. Boh Chew-Pen and Dr. G. C. Tansiongkun representing the areas of Taiwan, Hong Kong, Singapore and Philippines. From that time on, members were greatly increased, our society better known and all other good things are attributable to the good service of our Honorary Representatives. We are very thankful of that.


Mr. C. T. Chang, our Hon Representative of Taipei Photographic Society was on his tour around the world. When he was paying an official visit to our PSNY, it turned out to be a day when we had our General and Annual Meeting. With that opportunity, we invited Mr. Chang to give a lecture on the special architecture photography. Being a great architect by profession and an outstanding photographer as an artist, his talk was greatly beneficial to us and our members were very thankful to Mr. Chang for his kindness and the finest services to us and the PSNY.


During the celebration of the 30th Anniversary Founding of our PSNY, we have the intention to add some prestige to our PSNY and the purpose of the promotion of Pictorial Photography, we therefore have some special programs such as the printing the 30th Anniversary Founding Special, the creating of the Honorary Exhibitor (Hon EPSNY) honor, etc. Our members Fu-Hai Shin and Kwok-Noun Ho made a proposal to our PSNY to create a new and highest photographic honor, called International Honorary Outstanding Photographer of the Century of the Photographic Society of New York (Hon opc-PSNY) honor to be conferred to some of the most outstanding international salon exhibitors in Pictorial Photography and who have outstanding records in the international salons of Pictorial Photography for many years with their works in showing an unique style of it’s kind in the world or creating a new and special technique in Pictorial Photography. Also to some photographers, whose outstanding services to promote photography in an international scope in general and to our PSNY in particular. This is our purpose of expression in admiration and praise of these great living photographers. This proposal was approved and passed by the General Membership Meeting after a very careful study and discussion. The PSNY gave authority to the Board Director Chairman Wellington Lee to draft and set up the Rules and Regulation for conducting and bestowing of the Hon opc-PSNY honors. The Board Director Chairman, Wellington Lee has provided with all the necessary information, records and recommendations to the PSNY for use in conducting and bestowing the Hon opc-PSNY honors. The PSNY had approved and accepted all these Rules, Regulation, Procedures, information, records and recommendations of the Board of Directors Chairman, Wellington Lee, The Special Rules stated that his honorary honor and nobody may apply for it, but only may be conferred by our PSNY and the final recommendation of the Hon opc-PSNY Honor Committee.


For the purpose of convenience, time and expense saving, the PSNY held a meeting in February 20, 1983 to create a special ruling in authorizing all of our PSNY Overseas Representatives to collect any FPSNY and APSNY honor application works, prints and color slides from the local honor application and also the handle the judging there for the PSNY. After the judging, the Overseas Representatives report the results to the PSNY and final decision to be made whether or not in approving any application. In the event that this special arrangement of collecting and judging the honor application works are unsuitable at any time, the PSNY may modify or terminated the whole operation at once. On the same date in the meeting, the PSNY also created two SALON EXHIBITOR honors consisting of Excellent Exhibitor of PSNY (EEPSNY) and Salon Exhibitor of PSNY (SEPSNY) with the purpose to encourage our PSNY members to participate international exhibitions. Any PSNY member wishes to apply any these two Salon Exhibitor honors may write to the PSNY for the application rules and regulations.


Due to the cost of living and mailing fees have been increased substantially in recent years, some adjustment has to be made on the FPSNY and APSNY honor application fees. The Application Fee for the FPSNY is $50 and the APSNY is $30. The increase is becoming effective in January 1, 1989.


Our PSNY headquarter has been located at the Center Street, New YorkChinatown for more than 20 years. Due to the fast expansion of Chinatown around it, rents have been increased greatly in recent years. Our PSNY financial resource could not meet that demand. Therefore we have to give up the Society headquarter after a general membership meeting in 1993. Since then the meeting of our Society was held in restaurants until 1997 our PSNY president Weber Leung and YMC photo Studio & Filming In. generously allowed us to use the studio and facilities free of charge. Until 1999, Weber Leung took over that studio and let us to use that again free of charge.


Technology advancing rapidly and life in general has been changed. PSNY has to make some adjustment to meet the challenge by an amendment of the PSNY Regulation in a General membership meeting in 1997.


The PSNY 50th Anniversary Commemorative Celebration is 1999. PSNY planned to have a gigantic celebration by sponsoring a general membership photographic exhibition and printing of an anniversary commemorative edition containing some the pictures from this exhibition. All the pictures from this membership exhibition of photography will be donated to the PSNY by the exhibitors to a PSNY permanent collection. With the great support and loving care of the PSNY from the membership during this half century enabling us to make our Society into an international well known photographic organization. May I take this opportunity to express my sincere thanks and appreciation to all PSNY members in the world for their continuing supports and fine services rendered during all these years. Let us hope and wish that PSNY and all its members will be more successful photographically in the future.